G. Michael Purdy, Ph.D., held the role of Executive Vice President for Research from February 1, 2011 until December 31, 2019. Reporting directly to President Bollinger, Mike worked closely with Interim Provost Ira Katznelson and other University leaders on research strategy, sharing the goal of fostering an environment that attracts the brightest and most creative faculty and students to pursue questions that will elucidate and improve our world. His office continues to establish and administer the policies that govern the conduct of research and oversee the management of its research programs. It also assists investigators seeking external funding, promotes interdisciplinary research and awards seed money for early stage investigations.

He received his Ph.D. degree from the University of Cambridge in the UK in Marine Geophysics in 1974 and joined Woods Hole Oceanographic Institution (WHOI) in Massachusetts as a Post Doctoral Scholar. Over the next 20 years he built a successful research group specializing in observational ocean bottom seismology, studying the structure and dynamics of the earth's crust beneath the ocean. In 1991 he became Chairman of the Department of Geology and Geophysics (G&G) at WHOI, one of the world's leading Marine G&G Departments, and spent four years gaining experience in both national and international marine science planning and administration. He is author or co-author of more than 60 research articles in peer reviewed journals, more than 20 other reports and articles, and more than 100 published conference abstracts.

In 1995 he joined the Federal Government as Director of the Division of Ocean Sciences at the National Science Foundation, and spent five years managing an annual budget of more than $200M - the primary source of funding for ocean sciences research in the nation's universities. While at NSF he established the new multi-disciplinary research program "Life in Extreme Environments" and built several valuable interagency collaborations.

In 2000 he joined Columbia University as the Director of Lamont-Doherty Earth Observatory, the single largest unit of the Columbia Earth Institute. In this position his primary interests were in the building of a first class interdisciplinary research institution that leads the world, not only in the quality of its research, but also in its ability to relate the results of this research to earth issues of importance to humanity.  Over 120 Ph.D.-level researchers, 80-90 graduate students and an increasing number of undergraduates work and study at the Observatory. 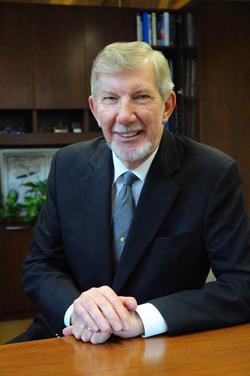